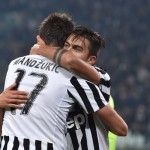 Reports are out claiming that Juventus striker Paulo Dybala was delighted with his goal in victory over Fiorentina.

He said : “I saw the defender was coming at me too quickly, so if I did a dummy I knew he’d go down. That left me with space to score.

“It’s great to score goals, but today is wonderful because we got a very important victory.

“We have to continue like this, we are on the right track. We were far behind, the Coach said we’d close up to this stage and he was right. There’s one game to go before Christmas.

“Today we won against a team that plays excellent football, but the courage and determination saw us earn the victory.”