It has been reported that Barcelona ace Pedro has resisted late interest from Manchester City to commit to Manchester United. 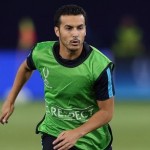 The £21.5m deal will be completed within the next few days.

Reports from Spain say United have submitted formal written offer worth £17.8m up front with £3.6m included in add-ons.

Pedro has pushed for the United move, despite an attempt from City to rumble their plans.