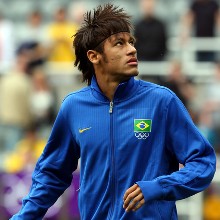 Reports are out claiming that Pele has urged Santos star Neymar to reject a move to England.

It is said that Oscar is urging Neymar to join him at Chelsea, while Manchester United were mooted to have offered a club record £38 million on transfer deadline day for the youngster.

But Pele, who famously turned down United while at Santos, declared: “When I heard about the deal, I looked him up to tell him not to go to the English league.

“It is very tough and Neymar, I love him, is not ready for it, physically.”