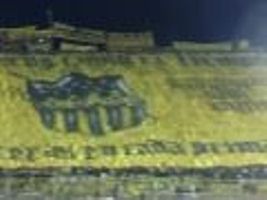 It is said that the flag with the team’s yellow and black colours took four months to make, cost $33,500 and celebrates the 120th anniversary of the Uruguayan club, who have won the South American title five times.

Victor Bedrossian, one of the 200 fans involved in the project, told Reuters : “Penarol could present the flag to the Guinness Book of Records to be recognised as the biggest ever created,”.

More than 300 fans helped to carry the flag weighing 1,880 kg from the Penarol club headquarters in Montevideo to the Centenario.