Aaccording to Bayern Munich boss Pep Guardiola, Toni Kroos will be staying with the club at least for another season. 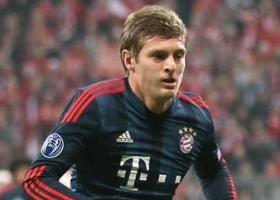 The 24-year old German international is on the radar of Manchester United but Guardiola insists he will at least see out the next year of his contract at the Allianz Arena.

“Toni has one year more of a contract and Toni will remain,” Guardiola said.

“I hope he can extend his contract and stay with us because he is a very good guy, he loves his game, it is not just a job for him and I would like him to stay.

“I spoke with the player, with the club, I gave my opinion. After that I am not manager, I am just the trainer.”