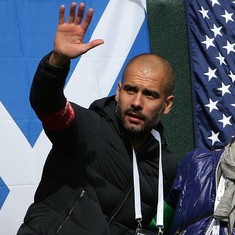 Reports are out claiming that former Barcelona coach Pep Guardiola wants his next job to be in the Premier League, preferably in London.

The Telegraph reported that Chelsea owner Roman Abramovich is a long-standing admirer of Guardiola’s and looked into the possibility of making him the club’s manager after the departures of both Carlo Ancelotti and Andre Villas Boas.

Guardiola’s representatives have, through intermediaries, also made contact with Arsenal over the possibility of a future vacancy at the Emirates Stadium. But despite the contrast in early-season fortunes between Arsenal and high-flying Chelsea, Arsène Wenger’s position is more secure than Di Matteo’s.

“Pep wants to manage in London and he is looking for the right project,” said a source familiar with Guardiola’s situation.