It has been revealed that Bayern Munich coach Pep Guardiola wants to join Manchester United – and not Manchester City. 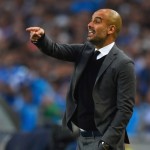 The Mail on Sunday claims that Guardiola would prefer to manage Manchester United when he eventually comes to the Premier League, according to sources close to the Bayern Munich manager.

This presents United with a dilemma as to whether to move for the two-time Champions League winner this summer.

Bayern chief executive Karl-Heinz Rummenigge prompted a flurry of speculation before the club’s annual general meeting last week when he said that no-one was irreplaceable.

Louis van Gaal is under contract at United until 2017, and Guardiola would not want to undermine a colleague, so could even take another year out if he chooses not to stay at Bayern.