According to reports by The Sun, Manchester City are set to offer manager Pep Guardiola a new deal in the summer. 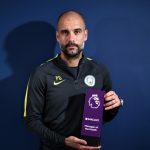 The Spaniard, who arrived last summer, failed to win any silverware in his first season with the club and could only lead them to a third spot in the league.

However, City are keen on securing the long-term future of Guardiola and want to tie him down to a new deal this summer.

Carlos Tevez To Sue TV Show For Calling Him “UGLY”