Reports are out claiming that Arsenal manager Arsene Wenger has revealed that Bayern Munich manager Pep Guardiola wanted to play under him at the Gunners. 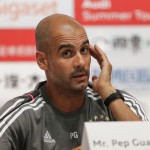 “I can’t really remember, after that he went to Italy and I had players like Patrick Vieira and Emmanuel Petit who were still young and played for the national team as well.”

Guardiola spent most of his playing career at Barcelona and then went on to play for Serie A clubs Brescia and AS Roma. He also enjoyed spells in Qatar and Mexico during the later stages of his career.

Arsenal Boss Wenger: Diaby Back In Training Next Week