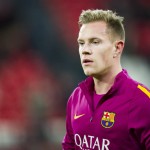 Marca says Ter Stegen’s future at Barca is in doubt as the German is unhappy playing second fiddle to Claudio Bravo in La Liga, with the former Borussia Monchengladbach stopper preferred in the Champions League and Copa del Rey.

Sources close to Guardiola have revealed that Ter Stegen, who is under contract until 2019 with an €80m buy-out clause, fits Guardiola’s goalkeeping brief perfectly and he wants to bring him to the Eithad Stadium this summer.

Despite Guardiola’s history at Barca – he served the club with distinction as a player and delivered unrivalled success as a coach – he has no problem in raiding the Camp Nou for Ter Stegen.