It has been reported that Bayern Munich coach Pep Guardiola will not underestimate struggling Manchester United tonight. 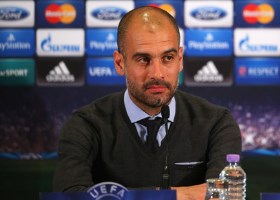 Ahead of Tuesday’s Champions League quarterfinal first leg at Old Trafford, David Moyes’ United team sit seventh in the Barclays Premier League, with almost no chance of finishing in the top four.

The Spanish tactician is wary of the fact that United are underdogs in their own stadium, though.

“Last season Bayern won everything and this season we are over 20 points ahead of our opponents with seven matches to spare,” Guardiola said.

“But I know in the deep of my heart which team we are going to play against. Maybe they haven’t had a good season in the league but when I see (Wayne) Rooney, (Nemanja) Vidic, Rio (Ferdinand), Chicharito (Javier Hernandez) and (Danny) Welbeck, I see very good players.

“I don’t know why United haven’t played well in the league, but over one game or two games, they can beat us.”