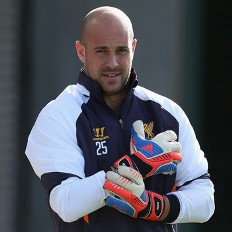 It has been revealed that Liverpool keeper Pepe Reina hopes to be back to replace Australian Brad Jones in the near future.

The Spanish international goalkeeper suffered a minor hamstring injury while on international duty with Spain last week and was not risked against Reading.

“It wasn’t worth taking any risks because you risk it getting worse. I’ll be patient and get really good.

“Brad was excellent. He was composed, he was really good in the air, when he was called on he was fast off his line, and he played well with his feet. He had a complete game.

“He’s a good fighter and a good ‘keeper for Liverpool, not just an understudy. He’s another ‘keeper for the club and he’ll do his best to play as many games as possible.”