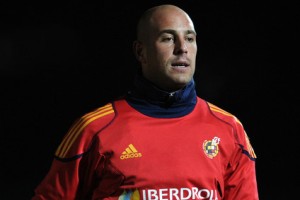 Liverpool goalkeeper Pepe Reina was over the moon after Spain’s World Cup triumph over Holland on Sunday.

The 27-year old did not make an appearance in the tournament but was still an integral part of the Spanish squad and was almost speechless during the aftermath of his nation’s biggest day in football.

Reina said : “It feels there are no words to describe it. It is the biggest tournament in the world. We are really proud of what we did and I think the people in Spain feel the same. It is for all the fans and for all the country,”.

“I don’t mind the quality of the final all I mind is this (points to medal) and we have it. We will go into history. Holland were a little bit aggressive, but it is normal there is a lot at stake and we did what we knew.

“We have done everything and to win the Euros and the World Cup together is all you can ask of a team. Of course we want to win many more tittles but it is going to be difficult. The pressure is never again with us.”