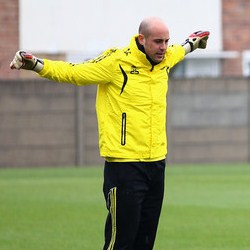 Liverpool goalkeeper Pepe Reina has declared that the club must bounce back after their Europa League exit at the hands of Braga.

The Reds were bundled out of Europe at home last night.

The Spanish international told liverpoolfc.tv: “We have to bounce back now – that’s football. It’s not about how you get knocked out – it’s about how you react. We’re Liverpool and we have to react.

“We have been better in the last three months and that’s positive. We have to look at the big picture and we are improving, we are growing.

“We are disappointed and we know it’s a trophy we can no longer fight for. Now we have to make sure we finish as high as possible in the league.

“It’s a difficult moment and it’s not nice but there are still two months ahead of us and we have to keep going.

“Of course fifth is still do-able. There are nine games to play and a lot of points. Tottenham are involved in the Champions League still and have plenty of games. Hopefully we’ll win enough games to get fifth but of course everyone knows it’s difficult.

“You cannot say we are not going to play in Europe because fifth place is still available.”