Reports are out claiming that Pepe has signed a new contract with Real Madrid. 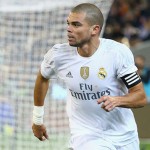 Real Madrid announced on Friday that the 32 year old defender has signed a one-year contract extension.

A statement from Real Madrid read: “Pepe has extended his contract for another season and will remain tied to the club until June 30, 2017.”