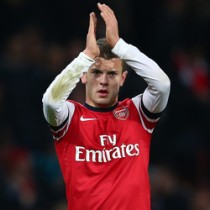 Arsenal could face yet another transfer saga with one of their star players after German champions Bayern Munich emerged as potential suitors for Jack Wilshere.

Former Barcelona tactician Guardiola is set to take over from Jupp Heynckes at the Allianz Arena this summer, and has reportedly made Arsenal midfielder Wilshere his prime transfer target.

The Champions League finalists are arguably the strongest club in Europe this season, and Guardiola wants the 21-year-old to form the core of his midfield as he bids to improve the Bavarian heavyweights further.

Wilshere only signed a new long-term deal with the Gunners this season, and is contracted to Arsenal until the end of the 2017/18 season.

However, Guardiola will try and tempt the Stevenage-born player to Munich anyway, who he believes may become increasingly unsettled in the North London outfit continue their trophy drought next season.

Reports in Germany suggest that Guardiola is defiant over Wilshere’s potential availability, and despite the England international joining Arsenal as a nine-year-old he hopes to lure him to the Bundesliga.

During his time as Barca boss, the 42-year-old completed the signing of Arsenal talisman Cesc Fabregas for a fee of around £30 million.