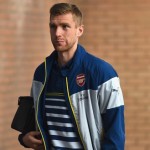 Reports are out claiming that Arsenal defender Per Mertesacker has accepted that the goalless draw against Chelsea on Sunday has ruined the chances of the Gunners winning the league this season.

The Blues are still 10 points ahead of the Gunners which suggests to the German defender that perhaps it’s too late in the season to make up the points deficit.

Mertesacker told Sky Sports: “We gave everything, had a couple of chances and defended well. It was a good performance, but not enough to get the vital three points we needed to compete for first place.

“We deserved the point, but could have done better in the final third. We lacked the final pass maybe. I had a chance but I rushed myself.

“Maybe the title is gone but you never know, we will stay there until the end.”