Reports are out claiming that Arsenal defender Per Mertesacker believes consistency will be the key if the Gunners want to forge a genuine title challenge next season. 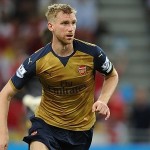 The German international centre back believes the Gunners have the ability to challenge the likes of Chelsea and Manchester City on any given day but must improve their overall performances in order to maintain a title threat all campaign.

He told the club’s official website: “We need to be at our best. We’ve shown in the cup that we can be consistent for six games. We want to extend that and show that we are real title contenders from the start, not only in the second half of the season.

“We want to be ready right from the start and not getting as many injuries as last season would be lovely and good for us.

Meanwhile, although Arsenal have been accused of lacking grit in the past, the World Cup winner believes that there is a good spirit and a belief in the squad that can help the team reach the next level.

He added: “The belief is still there – we always had a certain belief in ourselves – and to win trophies back to back is something special, but let’s add that little extra to be a competitor for the whole season.

“The squad will be in a good mood and in good fitness. We have to be because there are plenty of competitors for the title.” Alex Oxlade-Chamberlain Insists Arsenal Must Not Relax Against Anderlecht