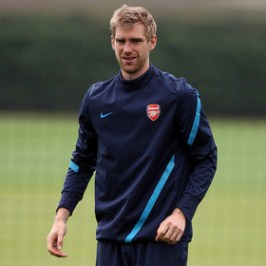 Per Mertesacker has admitted that his move to London has been a year in the making.

The 6ft 6in German, now 27, revealed he would have moved to the Emirates Stadium last summer, had he got his way.

Mertesacker said : “I only knew about Arsenal’s interest three days before I moved,”.

“Then Arsene Wenger called my agent and said that ‘perhaps you can be my man’ or something like that.

“I had to do what he wanted because, one year before, he asked for me and the manager of Werder Bremen didn’t let me go and I wanted to.

“I had to do it very quickly but that was kind of my wish to go to the English league a couple of years ago.

“It is totally different here, especially in training. There are more passing sessions every day compared to other clubs. There are the little things – games every four days, the Champions League as well, which is a great challenge for me and the club, and a very young team with potential.”