Arsenal defender Per Mertesacker has admitted that their performance in Wednesday night’s 2-0 Champions League loss to Napoli was not good. 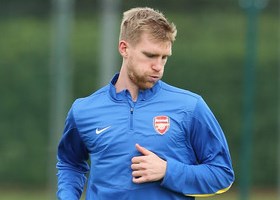 The Gunners managed to scrape through to the Round of 16 despite the defeat, which came via goals from Gonzalo Higuain and Jose Callejon, which was the main thing in Mertesacker’s mind.

Although they were easily beaten, the German international expects a much better showing when the Premier League leaders head to fourth-placed Manchester City on Saturday.

The centre-back told Sky Sports : “It’s a strange atmosphere at the moment because we lost, by far, especially in the second half,”.

“We were always on the back foot. We took a little break today, but we’ll be back on Saturday.”

Mertesacker added: “We gave 10 per cent less mentally because we were always thinking we were through.

“I think we were lucky today but we deserved (to go through) because we played a good group stage. Now we concentrate. We’re second in the group for the draw next week.” Arsenal’s Ozil, Sanchez Set To Be Fit For Chelsea Clash