Reports are out claiming that Arsenal defender Per Mertesacker is eyeing FA Cup glory next week. 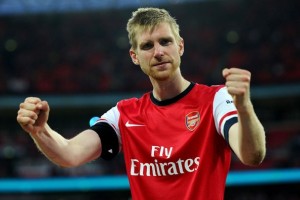 The 29 year old German international centre back struck in their semifinal win over Wigan Athletic.

The former Werder Bremen star said : “I was really happy when I scored,”.

“That was something really special and we took that strength, that mental strength which came back after that goal, to go to the final. But during that game, it felt really strange. It was a quite tough game.

“You expect a lot from yourself, but especially when you play against a Championship side. You drop that five, ten per cent of mental power.”