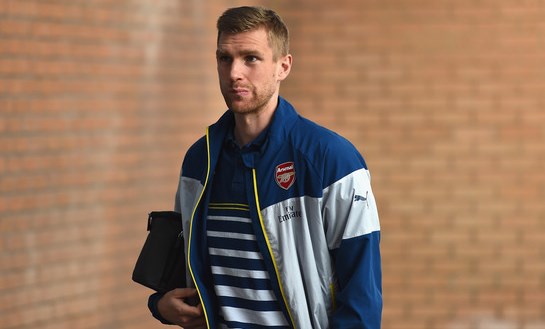 It has been reported that Arsenal defender Per Mertesacker was forced off halfway through the FA Cup semi-final due to a twisted ankle but he is already targeting back-to-back trophies with the Gunners.

The German international centre back sustained an ankle injury during the tense 2-1 win over Reading at Wembley on Sunday but has already put that to the side as he dreams of holding aloft a second-straight FA Cup.

He said: “I twisted my ankle but obviously I am delighted that we are back at Wembley – that is a fantastic achievement for this group for the second consecutive time.

“We are really proud.

“It was a really tough game and we knew before that they would fight for their lives and give absolutely everything to keep us away from their goal and they did it fantastically. We are just delighted that we made it again.

“It is a little progress [and] it would be a great honour, back to back FA Cup wins. We were knocked out of the Champions League and that was a big blow for us but after that we responded and it is a great achievement. Let’s continue our great run.

“We just wanted to win and do something fantastic for the team and the group. You can see everyone is absolutely happy and delighted.”

Holders Arsenal will play Aston Villa in the final at Wembley on May 30.