Reports are out claiming that Arsenal defender Per Mertesacker is full of praise for young fullback Hector Bellerin. 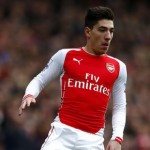 Bellerin has impressed fans and pundits alike with a number of mature performances.

Mertesacker said: “He has got great talent and has shown it over a couple of years now but the breakthrough – the real breakthrough – has been this season for him.

“Normally he has been No 3 in the right-back position, so it was difficult for him.

“Due to injuries, he came in, took these games he received from the manager and took it really seriously.

“Everyone knew before that he’s promising but you have to deliver when you get a chance, you have to be straight in.

“It was a rough start for him against Borussia Dortmund away in the Champions League, but to come back even stronger, that’s his strength.”