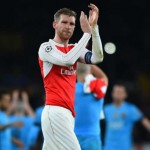 Reports are out claiming that Arsenal defender Per Mertesacker says that the Gunners will shift their focus to Premier League duties before thinking about the Champions League return leg against Barcelona.

The Gunners suffered a 2-0 defeat in the Round of 16 first leg at Emirates Stadium on Tuesday night with the return leg at Nou Camp scheduled to take place on March 16.

Prior to that, third-placed Arsenal have key league fixtures against Manchester United, Swansea City, Tottenham Hotspur and West Bromwich Albion as well as the FA Cup fifth round replay with Hull City.

Mertesacker said: “We have to concentrate on the Premier League now and in one month we will face Barcelona again.

“If we have the same courage and bravery, we still have a chance – we won’t give up. We are always fighting and we keep going like that.”

Aaron Ramsey : Our Confidence Is Returning!