Reports are out claiming that Arsenal defender Per Mertesacker feels Germany are ready to win the World Cup this month’s tournament. 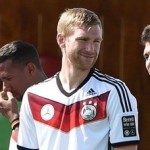 The Arsenal hero, who takes on Cristiano Ronaldo and Portugal on Monday, knows there is a degree of impatience in Germany as Joachim Low’s national team begin their World Cup campaign in Salvador.

“We finished the last two World Cups in third position and that is really consistent,” says Mertesacker. “What we need in Germany after all these years is a title as well. We’re talking all about titles and trophies.

“The level of this team is really high and that comes with experience.