It has been reported that Arsenal defender Per Mertesacker says victory at Norwich City is crucial after their defeat at West Brom last week. 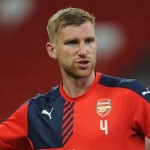 After falling to early losses to West Ham and Chelsea, Arsenal responded by winning the following week and Mertesacker believes this is key as they head to Carrow Road after a loss at West Brom.

He said: “There are always periods when you have to respond very quickly to disappointments if you want to keep up with the best teams.

“If that happens too often, you have no chance.

“It looks like all the teams at the top are well prepared but everyone gets a setback from time to time, so there’s a massive chance we’d like to take.

“But we can only do it by doing our jobs, being well prepared as a team and when there are disappointments, not to blame ourselves too much, look ahead to the next game and try and get a better performance out of everyone.”