Reports have emerged claiming that Per Mertesacker insists his Arsenal team-mates will bounce back strongly following a 2-0 opening day defeat at home to London rivals West Ham. 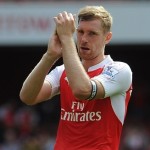 Asked if it was the worst start Arsenal could have endured, the German international said: “That’s right. I think we would love to have a different result but we have to take the result.

“It is our job [to be positive] now. That was the first game of the season. [It’s] a bad start but sometimes you need a bad start to come back and realise that you have to give more than just what we did.

“They scored at the right times – shortly before half-time from a set-piece. That was very disappointing. We worked a lot on that, not to concede. But I think they deserved it in the end, because especially in the second half, they just defended very deep and we didn’t find any solutions. Sometimes it’s good to come back from a massive loss. I think we are capable of coming back.”

“Sometimes the result is hard to explain,” he added.

“We played a great pre-season but that is absolutely nothing. I’ve said that before already, especially after the Community Shield game. That’s reality now. It’s a massive loss for us because we had great confidence and now it’s time for us to settle down, stay healthy and look forward to next Sunday.”

Alex Oxlade-Chamberlain Happy To Be Compared With Steven Gerrard