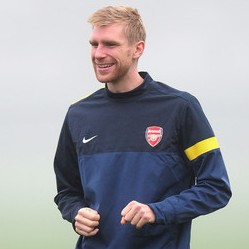 The Arsenal defender hopes that his training ground experiences will help him win that key individual battle on Saturday.

“We trained a lot in the last year together. Sometimes you feel comfortable to play against him, sometimes not. He’s one of the players where he has to feel that you are there all the time and that’s what we as a team have to do on Saturday.

“In one way [training together helps], you expect his movement or you might anticipate his movement. He’s one of the players who can change his movements very quickly because he’s very skilful and has ability, we have seen it last year.

“But he’s not the only one who can score or be dangerous so it’s all about the team performance on Saturday.” Arsenal Attacker Takes Aim At Uruguayan Players – Past And Present