Per Mertesacker has declared that Arsenal must step up their game for the Champions League knockout phase. 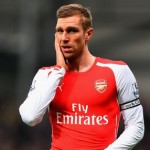 The German international knows Arsenal will have to be at their very best to make an impact on the knockout stages of the Champions League in 2015.

The Gunners head to Galatasaray for Tuesday night’s European tie already secure of a place in the last 16 having beaten Group D leaders Borussia Dortmund 2-0 a fortnight ago.

“So far, it is a solid performance (in Europe) overall I would say, because the last two seasons we got Bayern Munich in the (last-16) draw and that makes it very hard. We played well against Munich, but they are always a tough opponent. Let’s see what the draw brings this time round,” Mertesacker said.

“We will face these other teams and we need to be at our top level in 2015. We are really looking forward to the next round, because if you want to go all the way through you have to beat the best teams.”