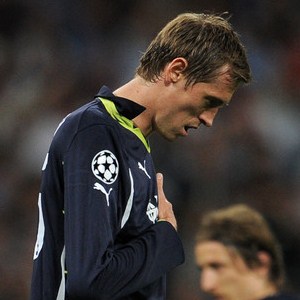 Premier League side Tottenham Hotspur were trashed 4-0 by Real Madrid in their Champions League quarterfinals at the Bernabeu last night.

Peter Crouch was sent off in the 15th minute of the match but Tottenham were already down 1-0 and outplayed in the opening exchanges.

The England international striker lunged at Marcelo for his second yellow card and the sending off did not help the cause as Real Madrid destroyed Tottenham in the second half.

Manchester City striker Mario Balotelli recently became a hate figure at his club for his sending off in an Europa League match which ultimately eliminated Manchester City out of the competition.

The Italian striker was singled out for the defeat and elimination and let us all hope that Peter Crouch don’t suffer the same fate.

Check out why Peter Crouch got sent off.