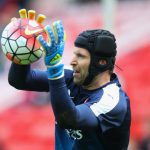 Reports are out claiming that Arsenal goalkeeper Petr Cech accepts Tottenham will finish above them on the Primer League table this season.

In Arsene Wenger’s 19-year reign his side have never finished below Tottenham in the league.

But after the stalemate with Sunderland, Cech conceded: “We have three games to play and we need to get as many points as we can.

“I don’t think it will be enough to finish in the top two now as the other teams have taken advantage of our two points dropped.”

He added: “We don’t seem to [be able to] kill the game off in the last two weeks and we dropped twice points and now the fight is to get the best position for the Champions League.”