Reports have emerged claiming that Arsenal goalkeeper Petr Cech lamented his side’s costly errors during the 3-2 defeat against Manchester United. 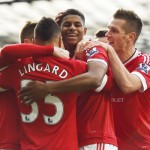 Arsenal’s title aspirations were dealt with a huge blow following their loss to United at Old Trafford on Sunday and the Gunners would most certainly have been left disappointed by losing out against a youthful Red Devils’ side who had a brace from 18-year-old Marcus Rashford to thank for their positive result.

Cech has made no excuses for Arsenal following the defeat and has stated that his side were made to pay for silly errors in defence.

The 33-year-old said: “Man United away is a big game. They fight to have a chance to enter the top four, so we knew it was going to be a difficult game. In a game like this, you can make mistakes and we were punished for them. Every time we made a mistake at the back, they [profited].

“The third goal was a lucky bounce for them and I thought it was decisive, because if we could have come back to 2-2 in the second half, we would have had a chance to win the game. At 3-1 down, you try to get one back as soon as possible, which we managed to do. But we didn’t create enough to score in the last 10 minutes.

“It’s a step back but we can still make up for this. We have two important games coming up this week and if we manage to win both, the table might look better again.”