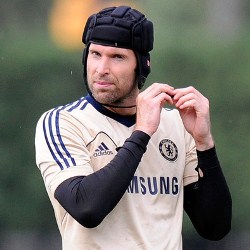 Petr Cech insists that Chelsea will be Premier League title challengers this season.

After recruiting £64million worth of reinforcements during the summer, Cech insists the Blues are fired up for a war with City and United.

“We want to defend the Champions League and the FA Cup and we want to win the Premier League.

“No one has successfully defended the Champions League.

“We want to be the first and that’s an exciting challenge.” Fernando Torres Has No Intentions Of Leaving Chelsea