Reports are out claiming that Arsenal’s latest signing Petr Cech has hailed the spirit of the squad. 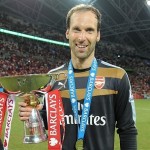 Cech is confident that the solidarity and togetherness he experienced on tour with the Gunners in Singapore can help the north London club mount a serious title challenge next season.

Petr told Arsenal’s official website: “What I’ve found is a group of players who work very hard and who are focused on what they are doing on the pitch to get ready”.

“I found that the team spirit is extraordinary in the way that everybody pulls in the same direction. This is why I believe that we can have a successful season.

“We need to have that connection between players to reach the same targets. I’ve only been here a few days but I can feel that the team is together.

“We have a good balance in the team. We have players with a lot of experience and we have young players who want to prove their value by being a part of the first-team squad and playing as much as possible.

“There are hungry players, there are experienced players and in terms of the age category we have a good balance. We hope to use that to our advantage.”