It has been revealed that Chelsea goalkeeper Petr Cech rates Manchester City still as title favourites. 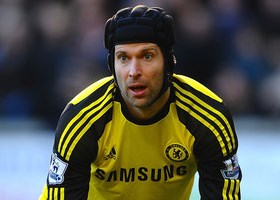 City were stunned 1-0 at home by Chelsea last night.

However Cech insisted on his personal website: “If we had lost, they would have been six points in front of us. This way it’s level.

“In my opinion, City are still the biggest favourites to win the title.

“Arsenal are two points above them but for us nothing changes. We are carrying on and need to confirm this win with another in the home match versus Newcastle.”