Reports are out claiming that Goalkeeper Petr Cech is already looking ahead to next weekend following his disappointing Premier League debut for Arsenal. 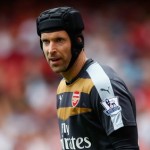 The Czech international, signed from Chelsea earlier this summer, was arguably at fault for both of the goals the Gunners conceded in their shock 2-0 defeat to West Ham United at the Emirates Stadium on Sunday.

Cheikhou Kouyate’s 43rd-minute header could have been thwarted had Cech reacted quicker to Dimitri Payet’s free-kick before the veteran appeared to be caught out by a quick-thinking Mauro Zarate just before the hour-mark.

After the match, Cech took to Twitter to assured Arsenal fans that sanity would be restored when they travel to Crystal Palace on Sunday afternoon.

Wenger : Thierry Henry Has Not Lost His Class Or Brain!