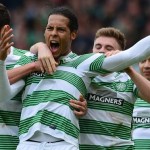 According to Stiliyan Petrov, Virgil van Dijk certainly has the ability to play in the Premier League.

The Celtic defender is being linked with a number of top flight English clubs including Arsenal, Southampton and Sunderland among others and according to ex-Aston Villa and Hoops midfielder Petrov, he has the traits to make the step up.

Petrov is aware of van Dijk’s situation after the Dutchman said he was eager to test himself in a higher quality competition and the Bulgarian admits he went through a similar scenario himself when he was in Glasgow back in 2006.

“There appears to be no doubt Virgil van Dijk is good enough to play in the English Premiership. He has the attributes. But he has to be patient and professional,” Petrov said in the Daily Mail.

“I can understand his frustrations. I’ve been in the same situation but I felt I needed to move and that was when we had a really great battle every year against Rangers. Virgil has never had that kind of thing since he signed for Celtic.

“You feel you have reached the stage where you need to move on from Scottish football. It is nothing against Celtic, they are one of the biggest clubs, but it’s about testing yourself at another level.

“But the situation is out of his hands. It’s about a club wanting to buy him and then agreeing a fee with Celtic. If nothing happens in the summer then he has to get on with it and remember he is still playing for one of the very best clubs.”