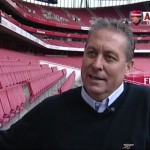 It has been revealed that Kenny Sansom will be given all the support he needs to beat alcoholism and a gambling addiction, says the Professional Footballers’ Association.

The former England defender revealed he had contemplated suicide after becoming homeless because of his problems, reports BBC Sport.

The 56 year old won 86 international caps and played more than 300 games for Arsenal during the 1980s.

In 2013, he had been working at his first club Crystal Palace as a match-day ambassador.