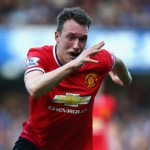 Reports are out claiming that Manchester United defender Phil Jones says they must regroup after defeat at Swansea City.

The England international has called for unity.

“You have to stick together and get back on the training pitch and prepare well. That’s what we’ve been doing this week. It’s an important game for us,” he told manutd.com.

“It won’t be easy, Sunderland are a tough team but we’ve done well at home recently and we need to bounce back from the defeat at the weekend. It’s never nice to lose a game. We thought we played reasonably well, especially in the second half, but this will be another difficult match for us and one we need to win.” Jack Wilshere : Man Utd Must Get In Barcelona Faces!