It has been reported that Manchester United defender Phil Jones is edging closer to full fitness with England’s World Cup squad. 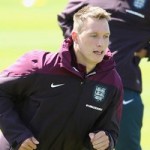 The former Blackburn Rovers star is ready to return to full training as the England squad regroup on Monday to continue their World Cup preparations.

Jones is recovering from a shoulder injury which prompted manager Roy Hodgson to rate him as the player most in danger of missing the tournament in Brazil.

He is unlikely to be risked as England play Peru at Wembley on Friday but there are games against Ecuador and Honduras once the squad reach their training camp in Miami. I Did Get Carried Away! – Leicester City Ace Jamie Vardy