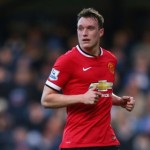 Reports are out claiming that Manchester United defender Phil Jones is eager to deliver victory over Arsenal to fans today.

The England international defender is keen to collect all three points against Arsene Wenger’s men.

“We know they’re a good team,” he told MUTV.

“We know what they pose, what threats they have, but we’ve worked on it all week in training and we need to win it – it’s our last game at home this season and we want to go out with a bang.”

The defender hopes a victory on Sunday could eventually see United finish above the Gunners – who slipped to a 1-0 home defeat to Swansea City in their last outing – should they fail to pick up maximum points at the Emirates Stadium in their remaining two games.

“We need to make sure we beat Arsenal on Sunday,” Jones added. “It’s an important game, and we then have to hope that they drop some points in the last games of the season and we beat Hull as well.” Atletico Not Interested In Selling Koke To Man Utd, Chelsea