It has been reported that Manchester United defender Phil Jones was pleased with victory over Champions League opponents Wolfsburg. 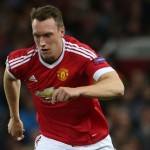 Jones came off the bench for the third successive game during Wednesday’s win over Wolfsburg.

“It was important that we got back to winning ways in the group after a disappointing start against PSV. We didn’t start the best but I think we finished the game well, we were strong and got the three points.

“It was a difficult test because they defended well as a defensive unit and made it hard for us to score, but we created quite a few chances in the first half. We probably could have gone in 2-1 up, but overall I think we did well to take the three points.”