It has been reported that Phil Jones was thrilled with Manchester United’s Champions League win over Olympiakos. 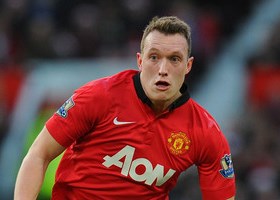 A hat-trick from Robin van Persie sealed a 3-0 win on the night and a 3-2 aggregate success, as David Moyes’ side staged a superb comeback to book a place in the last eight.

“We knew the objective tonight was to go and score three goals and not concede, and we’ve done that,” Jones told MUTV afterwards.

“On another night we could have scored more, but I thought all over the pitch tonight we were excellent. We were a real attacking threat and thoroughly deserved to qualify for the next round.”

The defender added: “We’re in it together. We’re a team, the manager and the staff, and we’ve got to band together and come through this difficult period, and we will do.”