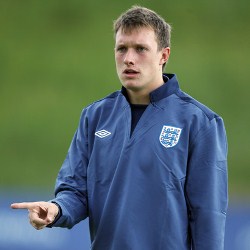 Manchester United signing Phil Jones has revealed that his favoured position is centre-back.

Sir Alex Ferguson has already praised the teenager’s versatility during the US tour and suggested he could be an option at right-back when necessary next term.

Jones told Inside United : “I used to play in midfield,”.

“But I definitely consider myself a centre-half and that’s where I play my best football.

“I like to see the game in front of me and read the play. At Blackburn, when the manager asked me to move into midfield, it was strange and I didn’t expect it.

“It took a few games to adapt to that role and the positions to take. If I was asked to do that here, I’d feel comfortable with it.”

When asked to describe his style, the 19-year-old stated: “As a centre-back, I read the game well. I’m good in the air and have a decent range of passing.

“Like every footballer, I have things to improve and I’ll continue to work on them at United.”