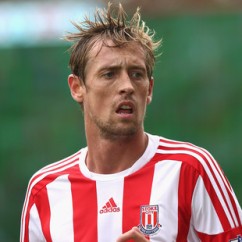 It has been revealed that Stoke City centre forward Peter Crouch has emerged on the radar of MLS club Philadelphia Union according to the brotherlygame.com.

The Union fan site is of the belief that head coach John Hackworth is looking at the possibility of bringing the towering 31-year old to PPL Park.

Crouch has made a positive impact at Stoke since joining from Tottenham in the summer of 2011 but the Union want to test the resolve of the Potters by potentially offering him a contract.

Hackworth admitted that there was room to bring in an experienced forward to help out the up and coming Philly strikers.

“That young group of attackers, they can only get better,” Hackworth said. “We’re looking to bring someone in to help them and the team get better.”