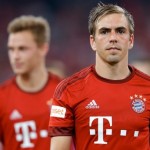 The Germany international was the longest-serving Bayern player before he quit and Lahm believes the departure of an experienced head will have a lasting impact on the current playing staff, who are struggling to come to terms with his exit.

“It is normal that at the beginning it is tough,” he said, before adding: “without him we will move on.”

“He is really, really loved by the fans, and the people (at the club).”