Reports are out claiming that Bayern Munich captain Philipp Lahm has praised Arsenal attacker and German teammate Mesut Ozil ahead of the the pair’s match up on Wednesday in the Champions League. 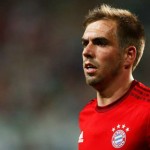 Ozil’s Arsenal travel to Bayern to face Lahm and his Munich side having defeated the Bavarians two weeks ago at the Emirates.

Speaking ahead of the match, Lahm picked out Ozil for praise and stated that the former Real Madrid man is the smartest player he has ever played with.

“Mesut sees things only he can — his vision is as good as I have ever seen. It was laughable when he was being questioned after his move to Arsenal.

“It doesn’t matter how good you are, everybody needs time to settle in a new league. Especially a league like England, where you don’t get as much time on the ball, and of course the game is a lot more physical.

“People don’t necessarily understand his game, he isn’t there to run at players or even beat them, he is far more intelligent than that.

“He finds space and creates chances for his team mates, and you only need to look at the assist table to understand there is nobody better than him at that.”