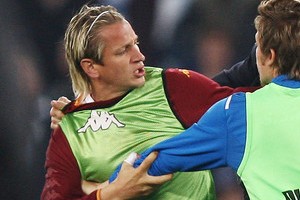 AS Roma defender Philippe Mexes has ruled out a move to fellow rivals Juventus.

The France international defender is however said to be weighing up his future at Roma.

Mexes said: “I am telling the fans that I am not going to Juve and that I will never go there.”

“They are great signings,” he said. “They will be important for us. I hope that this training camp is positive for both of them.

“The team will help them settle in. The important thing is to live with the group all together so we can work better.” Gianluigi Buffon Insists Italy Will Be Ready For Uruguay