Reports are out claiming that Borussia Dortmund striker Pierre-Emerick Aubameyang has cooled talk of a move to Arsenal. 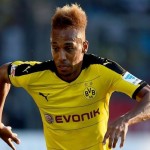 The Gabon international is in London this week for the Emirates Cup.

But he insisted to Welt am Sonntag: “You can take it for granted that I am not going to waste any time thinking about giving up how happy I am at Borussia, in the city of Dortmund and with this team.

“Dortmund have won the title twice in the last five years, we reached a Champions League final and had Real Madrid on the brink of elimination in the group stage when they went on to win it.

“If I didn’t believe that I could win titles with Dortmund, then I wouldn’t be here.” Mesut Ozil “Back To Roots” After Arsenal FA Cup Win