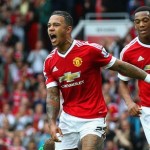 “The stats of Memphis do not weigh up against his attitude off the pitch.

“He hasn’t been the player that Oranje needed, especially when Robben was unavailable.”